Several Ogallala Water CAP team members are working on combining the strengths of different existing models to represent cropping and economic decisions, how yields are affected by historical weather and future climate trends, and how declining saturated thickness and well capacity may affect crop choice over time. Three Colorado State University (CSU) Ph.D. students working to develop this integrated modeling effort — Garvey Smith, Soheil Nozari and Zaichen Xiang — shared how their paths led to their current studies and their hopes related to their work with the team. Hannah Moshay, summer communications intern with Ogallala Water CAP, interviewed Garvey, Soheil, and Zaichen in June, 2019. 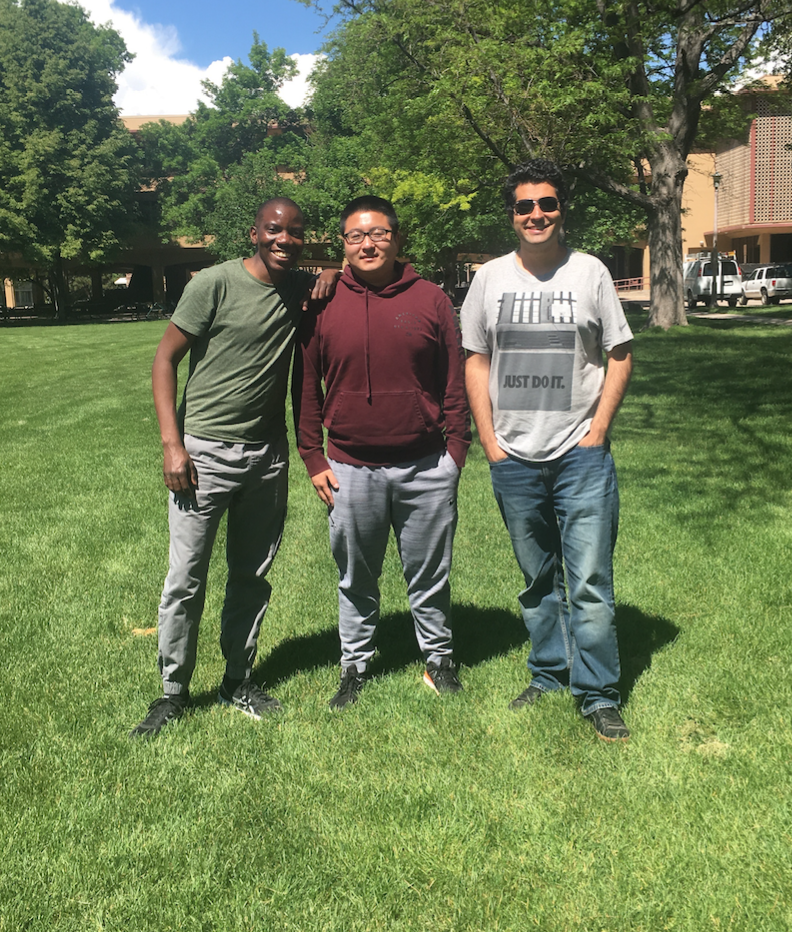 Garvey is from Kampala, Uganda. He has always had a love of nature and technology, which he channeled into his bachelor’s degree in forestry at Makerere University and his interest in applying technology to environmental management. After completing his undergraduate first degree, Garvey first worked at a bank, and then at a carbon credits company as a community project officer. As part of this work, he travelled around Uganda and learned of the positive impact that improved environmental and agricultural management can have on people’s lives, which motivated him to pursue a Master’s degree in the environmental management at Germany’s University of Kiel. Garvey’s current PhD activities let him combine his interests through analyzing how limited irrigation strategies may be used to prolong ground water use in the Republican River Basin in eastern Colorado using the crop modeling tool DSSAT. He is also supporting ongoing development of the irrigation scheduling tool “Water Irrigation Scheduler for Efficient Application” (WISE) for Colorado.

Soheil is from Tehran, Iran. From an early age, Soheil was captivated by civil engineering — by the scale, design, and technology involved in building skyscrapers, highways, and other structures which dominate urban landscapes. While pursuing a bachelor’s in civil engineering he discovered his passion for hydrology and fluid mechanics. This led to the opportunity to earn a Master’s degree in water resources engineering at Sharif University of Technology in Tehran, Iran. Through his studies, and by working for a consulting company in Iran on a project focused on restoring Lake Urmia, he gained an appreciation for the social and biophysical complexity of water management. Soheil’s current work with CSU’s department of Civil and Environmental Engineering focuses on coupling surface water and groundwater models for study regions of the Republican River Basin and Finney County in southwest Kansas, to improve predictions of groundwater head values.

Zaichen is from Shanghai, China. His passion for environmental stewardship and understanding water systems stems from a formative experience of having a close friend lose his life through exposure to pollution in the Yellow River. Appreciating how water is connected to people’s lives and the importance of protecting water resources, Zaichen pursued a bachelor’s degree in Environmental Engineering at Shanghai Ocean University, and continued his studies at Northeastern University for a Master’s degree in Civil and Environmental Engineering. Zaichen’s research with OWCAP focuses on groundwater sustainability in the Ogallala aquifer region through coupling the agronomic model Decision Support System for Agrotechnology Transfer (DSSAT) with the groundwater model MODFLOW to better inform and assess groundwater management strategies and possibilities.

What is your favorite aspect of your current work?

Soheil enjoys the freedom he has to explore future possibilities with modeling. He described many aspects of his current work that he really likes, “modeling surface water, modeling groundwater, considering future climate change scenarios, water use, playing with data analysis, cleaning data, working with ArcGIS, QGIS, those things.”

Zaichen also enjoys modeling and how they making integrating information and data across disciplines possible. “Modeling is useful, it can make people’s lives easier”. He appreciates how models can give a clearer picture of options to consider when tackling tough problems. Through his work on this project, Zaichen also has discovered how much he enjoys debugging code.

Garvey’s favorite thing is “combining crop modeling with field experiments even as he gains a better understanding of the water resource problem and regional agricultural systems”. He appreciates the interdisciplinary nature of his work and how it is “not just stuck on one thing, but a multi-​dimensioned problem.” He enjoys how his work challenges him to learn about crops and irrigation, new modeling tools and programming languages.

What was an unexpected aspect of your learning experience with the Ogallala Water CAP? Is there anything that you’re proud of in particular?

Garvey is enjoying the large collaboration among different people from different backgrounds who are working together on the OWCAP team. He feels he has grown as a researcher while learning from peers across disciplines. Garvey is proud of having learned to use DSSAT as well as how his programming skills have developed, particularly with Python. He has also found that the coursework required for his PhD has been necessary, very practical, and enjoys the opportunities to do field work.

Soheil said he has also enjoyed how collaborative OWCAP team members working on this project have been. He has been pleasantly surprised how open and receptive people are, including researchers who aren’t part of the project team whom he has met through OWCAP connections. Soheil also added that he has gained confidence working on regional and larger scale projects, and has enjoyed becoming a better Python and ArcGIS user. He is proud to have developed a MODFLOW model from scratch and to have learned how to use SWAT, a watershed to river basin scale model that is often used to inform regional watershed management.

Zaichen said that he has gained technical experience and learned more about the work involved in trying to solve real world problems. He appreciates having new professional connections through being part of this team and how collaborative his colleagues are. He is also proud that he has been able to work on a project which can help people in the Ogallala aquifer region as they face challenges related to the aquifer’s decline.

How do you respond to people doubting or being suspicious of models?

Zaichen said that while models are not perfect and have some variability and error, they are useful tools that can help move us closer to solving serious issues. Soheil agreed, noting that “we have no other better tool to predict the future.” Garvey added that the uncertainty of model “predictions” and confidence intervals can be reported with alongside the predictions. This means that models can offer ideas of just how accurate estimated predictions are as well as a range of values that reflect what might or will happen. Further, to get into a little detail of how models work, aspects of models like DSSAT (cropping systems) and SWAT (hydrology) are based on an understanding of physical processes in addition to statistically related observations, this makes them more reliable.

While it may not be useful to take model results at face value, it is important to look at the results/​trends models produce and their accompanying uncertainty. Models do help farmers, communities and regions develop and implement plans to adapt to changing availability of resources and mitigate crises.

Why does your work matter?

Garvey sees his work with Ogallala Water CAP, both individually and collaboratively, as supporting water conservation-​oriented decision making. The integrated modeling effort of this team will make it possible to explore a variety of scenarios aimed at achieving outcomes/​priorities for different levels of prolonged ground-​water use that take into account choices related to field management, weather, well capacity and economics.

Zaichen seconded Garvey in saying that this linked model can help contribute to developing a groundwater sustainability strategy. While modeling is not always 100% correct, he noted that it offers farmers as well as policy makers future-​looking perspectives. “Currently the system [that involves extensive groundwater withdrawal] is unsustainable, so we are trying to find solutions.” Soheil noted that two main aims of Ogallala Water CAP’s integrated model are to inform farmers about how continued aquifer drawdown will impact their operation’s yield and profitability, and to inform people involved in governance and policymaking of options worth considering while trying to conserve groundwater, sustain its use for irrigation, and protect rural economies. “The most important thing is warning farmers, presenting our results of the modeling in a simple way, and letting them know what is going on” so they can make informed decisions.